Ever since it
launched for mobile earlier this year,
PUBG Mobile has been an absolute sensation with over 50 million downloads on the Play Store. However, while fun, PUBG Mobile isn’t a game that’s easy in any way. There are a lot of players, and if you’re relatively a beginner at PUBG Mobile, or battle-royale games in general, we have some great tips and tricks to help you score that chicken dinner.,Before even getting into a game, there are a couple of settings you should double-check, and adjust in order to get a better performance, and to make it easier to score kills.,Choose between third person view, and first person view. PUBG Mobile’s latest update has brought the ability for players to choose between first person view and third person view. Before you start the game, you can
tap on the game mode button just below ‘Start’ and choose between ‘TPP’ (third person), or ‘FPP’ (first person)., 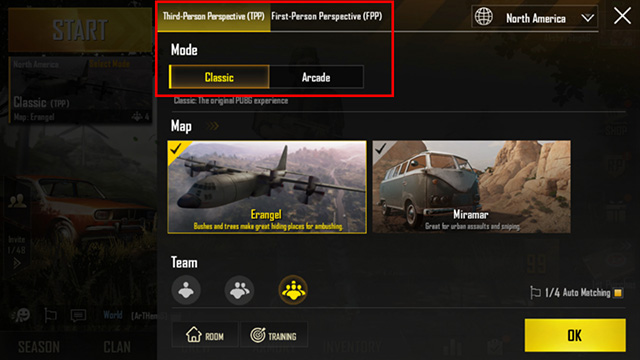 Adjust the graphics quality according to your phone’s capabilities. PUBG Mobile does this automatically, but if you feel like your game is lagging or dropping frames, you can lower it further, and vice-versa.

A higher graphics quality setting will definitely make it easier to spot other enemies, but if your phone starts lagging or dropping frame, make the trade-off and opt for a higher frame-rate instead. 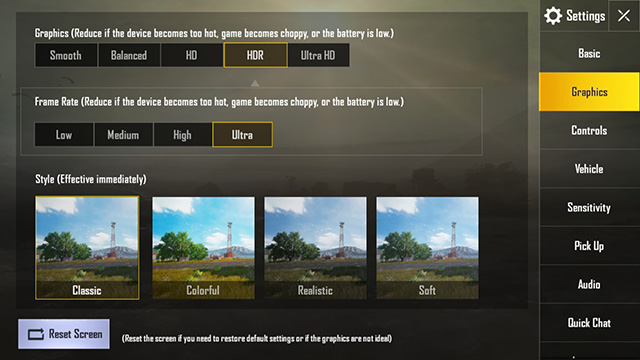 In Settings (the settings cog on the top-right),
go to Basic. Here, turn on ‘Peek & Fire.’ This allows you to peek from behind cover, allowing you to take shots without exposing too much of yourself.
Keep in mind, you’ll still expose your head, so use it with caution.,PUBG Mobile brings the ability to use your smartphone’s gyroscope to aim. This can be incredibly helpful when aiming down sights, or when you’re scoped in since you’ll be able to move your phone to aim at enemies instead of having to touch and drag on the screen. To enable gyroscope, simply head into Settings and then Basic. 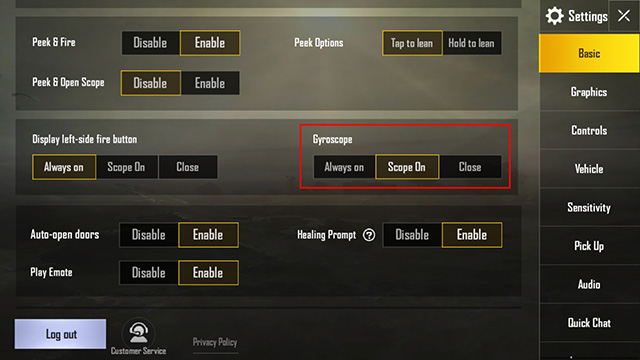 Check that ‘Aim Assist’ is turned on for easier aiming. Aim assist is required on a touchscreen phone (usually) because aiming on a touchscreen isn’t nearly as accurate as aiming with a mouse is. A spot-on aim will help you take out enemies quicker and will also help in close-quarter-gunfights. 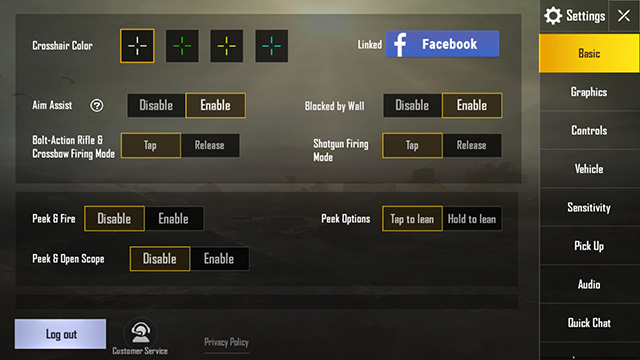 In
Settings -> Basic, enable the ‘left-side fire’ button
to easily shoot with the left hand while aiming with the right. This is very handy in scoped shots. Without the left-side fire button, you’ll find yourself aiming and shooting with the same hand, which, believe me, is really difficult.

Also inside
Settings -> Basic enable ‘Auto open doors’ to
quickly get inside buildings without having to constantly tap the door button. Do note that you’ll have to tap the button to close the door. 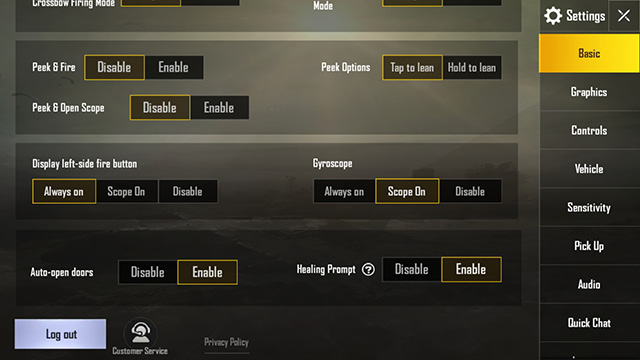 Head over to
Settings -> Controls -> Customize, and adjust the size and position of controls according to your needs. For example, I’ve made the
grenade button a little larger to make it easier to tap, and I’ve shifted the left side fire button to where my left-thumb naturally lands, so I can shoot even faster. 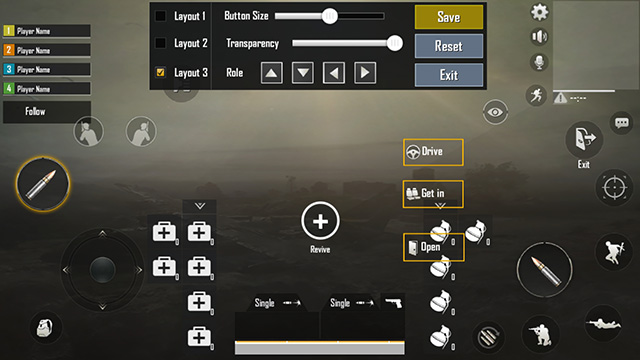 In Settings -> Graphics, you can also turn on ‘Auto adjust graphics’ to
ensure a consistent frame-rate while playing. This basically means that if your phone starts over-heating, or if the battery gets low, PUBG Mobile will automatically adjust the graphics quality to compensate for it. 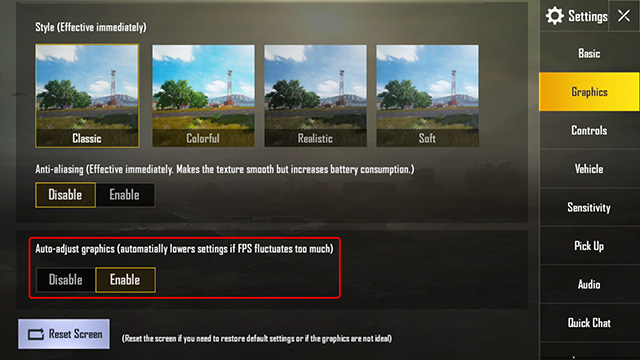 Choosing the perfect landing spot is very important. The choice of landing spot will depend on whether you’re comfortable with gunfights and are looking to get the best loot, or whether you’re planning on playing stealthily, and meet less players.,If you’re new to playing on the desert map ‘Miramar,’ you might be looking to find out what the best places to land in are. Well, Miramar has a bunch of places you can land in to get the best loot. However, each of these places come with a certain degree of risk, so make sure you’re ready for gunfights. 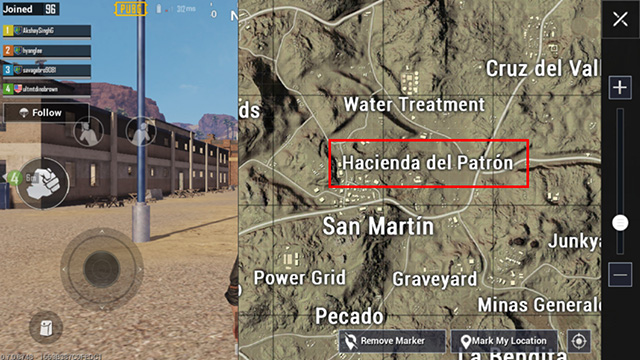 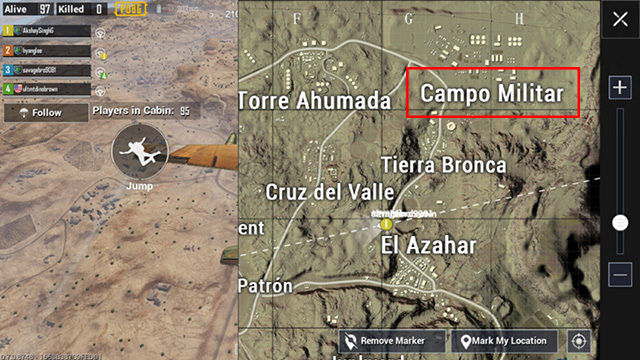 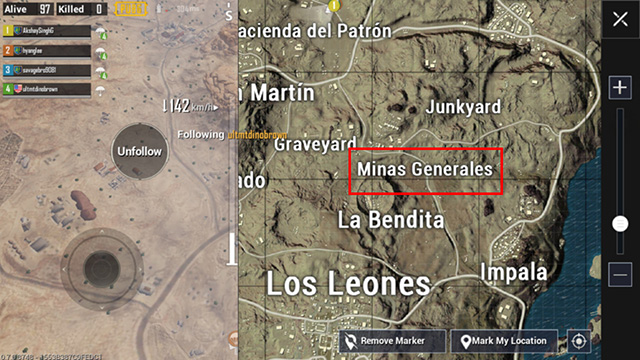 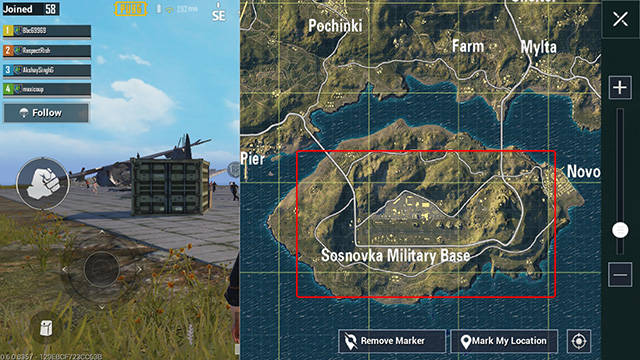 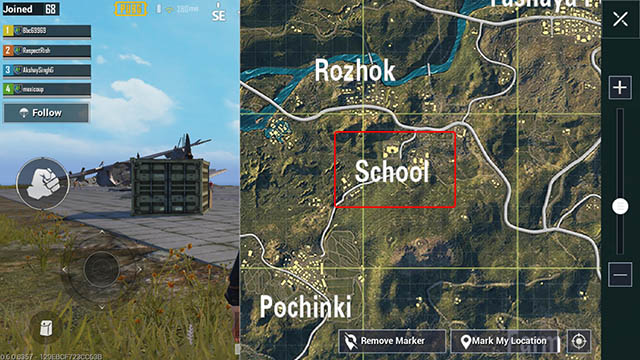 When you’re near that chicken dinner, the circle is usually pretty small, and one mistake could send you back to the lobby.,If you have a 4x or 8x scope, position yourself on the edge of the play zone where the blue circle is the nearest to the white. This will give you a complete view of the play zone, while vastly reducing the chances that a player might be coming from behind you.,If you spot someone and they haven’t spotted you,
only take the shot if a kill is guaranteed, otherwise you’ll just end up giving away your position. Since you’ve spotted them, you have ample time to take the perfect shot — aim for the head, and shoot in bursts until the player is dead.,If only two other people are left alive, keep hidden and let them fight it out, and then kill the remaining one player.,PUBG recently teamed up with Mission Impossible: Fallout to bring MI themed missions to the game, along with the Mission Impossible theme music in the background. While some people may love the new background music, if you’re not especially a fan of it you can turn it off by heading into
Settings and going to Audio. You’ll find the option to disable the Mission Impossible ‘BGM’ here. 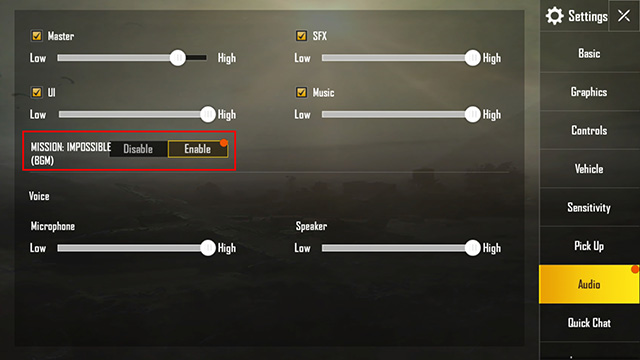 Quick chat is a very useful tool in squad games, especially if used correctly. While the default quick chat messages in PUBG Mobile are pretty good, you may want to change them to suit your team’s playing style. To do this, simply go to
Settings and then to Quick Chat. Here you will be able to delete the messages you don’t want to use, and put in alternative messages instead. It’s pretty useful. However, you can’t write your own messages, so you’ll have to make do with the options provided by PUBG Mobile. To be fair, there are a bunch of options, so it shouldn’t be too much of an issue. 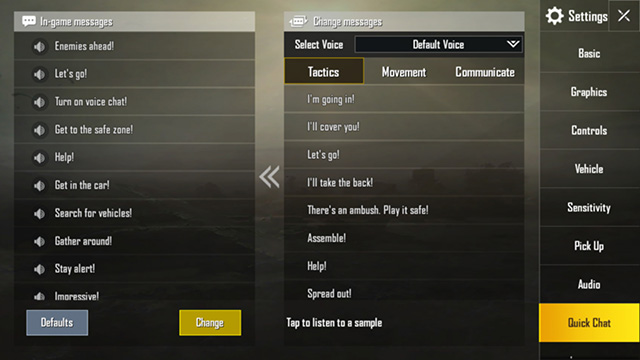 Most shooter games, be it CS: GO, Fortnite, or PUBG make use of directional audio that you can leverage to be more aware of your enemies’ locations. While the stereo-front-firing speakers on your phone may be good enough, put on a pair of headphones. This will help you in not only hearing distant gunfire, but also footsteps of an approaching enemy so you’re not taken by surprise. It might not sound like much, but it makes a pretty big difference.,The PUBG map frequently marks random regions as red zones. If you find yourself inside one, I’d suggest you get out quickly or else you’ll find yourself stuck in an airstrike of sort that will most likely kill you. However, if you’re in a place from where getting out is not easy, your best bet is to get inside a building. This way you’ll be able to survive the red zone.,Whether you like playing in Miramar, or whether you like the foliage in Erangel, if you really want to be a good player, use the map well. The map is updated with new safe-zones, and red-zones, so keeping a close eye on the map can be helpful. The map in PUBG Mobile also shows the direction of gunfire, footsteps, and vehicles which can help you get to know where enemies are, and if they’re coming towards you. 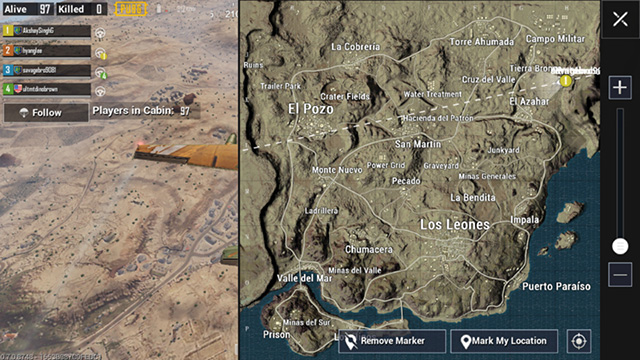 This isn’t something you’ll be able to do often, but some times the red zone can actually be a friend to you. If you’re inside a building when the bombs start dropping, you can do two things:,Unless you’re playing with your friends, the squad mode will often pair you up with people where at least one of them is an annoying prick constantly singing and screaming into their mic. With the latest PUBG Mobile update, you can mute individual team-mates by
tapping on the speaker-icon. This will open up a menu with all your team-mates’ names on it, simply
tap on the speaker icon next to the team-mate you want to mute and that’s it. Now focus on the game. 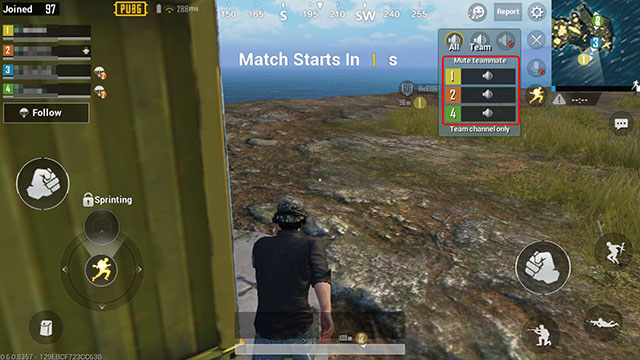 Sitting in the co-driver seat of a vehicle keeps it off, allowing you to hide inside without alerting other players to your presence. They’ll still be able to see you, but unless you parked your vehicle in the middle of the desert, there’s no reason for most players to suspect that a player may be sitting inside a vehicle and not driving it. 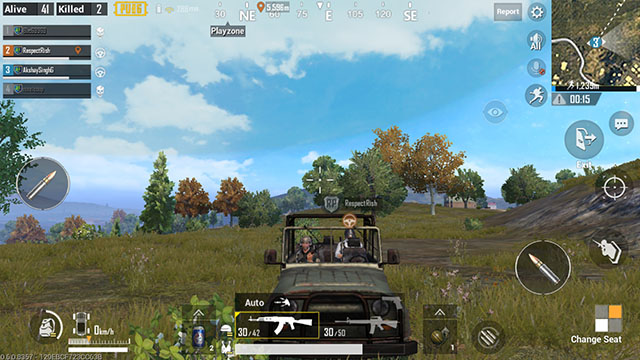 ,You can hide behind corners and
use the ‘eye-button’ to look around the corner without exposing yourself. This is a handy trick that can help you spot enemies without letting them spot you. 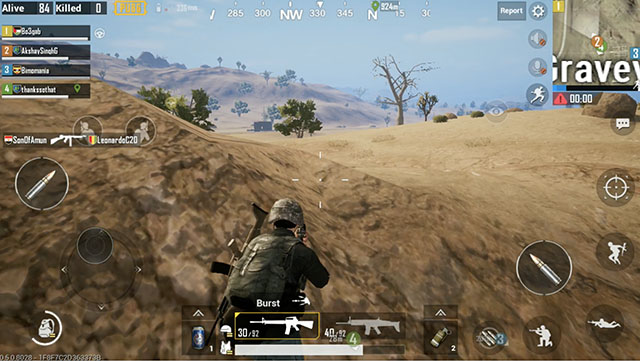 While healing, you can move for 0.5 seconds without cancelling the action. When in a hurry,
start moving when there’s 0.5 seconds of the heal left, giving you a headstart. This comes in handy when the circle is closing up behind you and you need to run quickly, or when you’re taking a short healing-break in the midst of a firefight.,Energy drinks and painkillers auto-heal you for a duration of time, and also give you a speed-boost, so use them often and as needed. Most healing equipment like bandages and health packs won’t heal you past 75%. Only the med-kit can heal you up to 100% and that’s very rare. Energy drinks and painkillers take their time to heal you, but they’ll take you up to 100% so make sure you use them often. 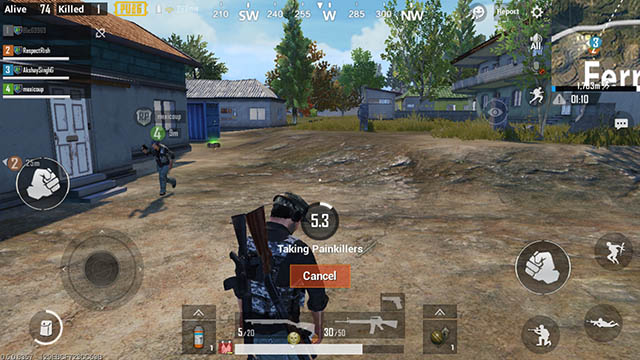 Staying still too long will make you easy pickings for a sniper; always keep moving, and take cover whenever you need to stop. The battleground in PUBG always has a bunch of players with snipers, and a lot of these players are good enough to take you out with a single head-shot. So keep moving.,

SEE ALSO: 14 Best Battle Royale Games You Must Play,Well, those were 30 PUBG Mobile tips and tricks that ought to help you on your way to becoming an awesome PUBG Mobile player. Use these tricks in order to get better loot, find the perfect PUBG landing spots, and survive till the very end and get that chicken dinner. If you come across some more PUBG tricks that you think we should include here, let us know in the comments section below.